Minns is an older non-binary multidisciplinary artist using dance, music technology, words, video and liveness. Immersed in the London queer club scene of the 1990s they were bassist in bands such as Leigh Bowery’s Minty and Aiden Shaw’s Whatever, and were a combat medallist in Silat martial arts world championships in 1997 while earning a living as a sex worker. As a mature person they took a degree in Dance and Music Technology, and began working with motion-sensing music tech in conjunction with martial arts.

Minns likes unexpected combinations, believing in the supreme connection of all forms and all beings. By combining ancient, esoteric movement forms with state of the art technology there is a sense of circularity,  a laugh at the supposed linearity of time, and the hope that the resultant soundscapes might have a cosmic resonance. Minns wishes to create new forms that do not answer the right questions. 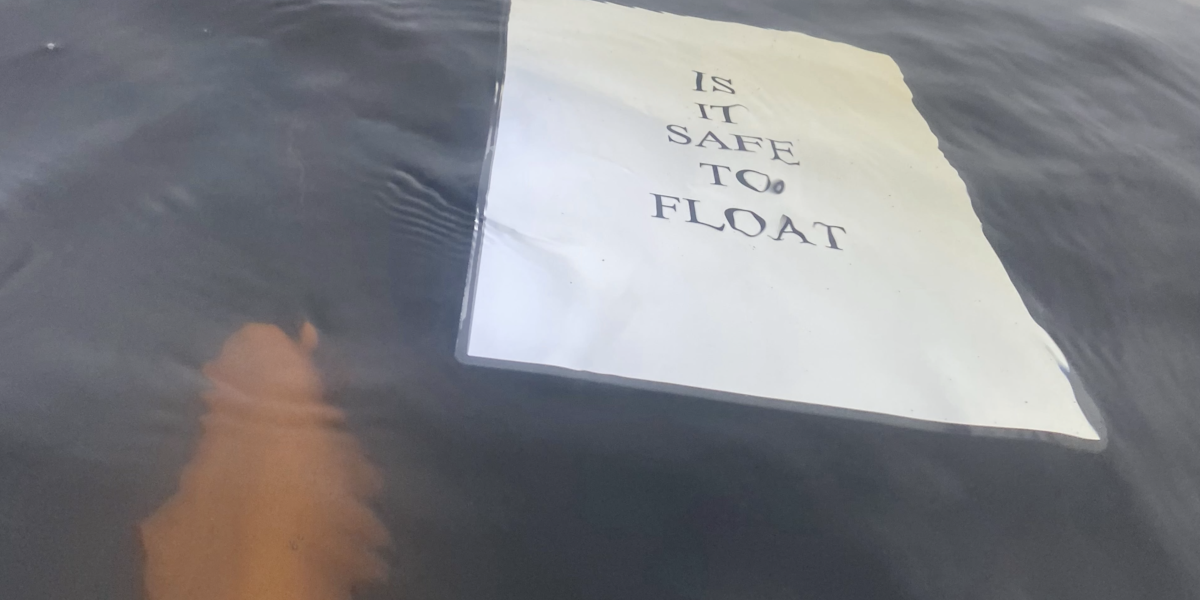 Is It Safe To Float
Is a new work created from my time at Milford House. As a listener you are greeted by a voice; I feel like I have nothing to say for this yet…things did happen…there was a plan, a proposal of sorts.
There is a sense of ambiguity, doubtfulness or perhaps a statement of failure that sets up the listener within the first few seconds. As a listener you may become confused, mislead, lost or maybe you find
yourself drifting, not listening to the words, you might hear only the sounds of water, splashing, hitting, or swaying. You might hear a soft, whispery, wavey voice that utters throughout; This is an unfinished work.
Everything you hear within the recording was created using the body, after floating at Portumna, I dragged my freezing body out the water, to try and remember fleeting thoughts. I kept my notebook close, water droplets poured onto the pages, causing ink spillages, torn bits and a pond of incoherent words that resembled water drawings rather than textual things. I spent my time at Milford House floating through these pages, gathering voices along the way.

Contested Site was situated in one of the old barns (circa 1700), on the lands of Milford House in Tipperary, Ireland. The first time I entered the barn, I knew I would perform there. I was struck by a series of etchings and some graffiti dug into the old, lime plaster. The hand-drawn etchings were daisy-wheels, or carpenter’s marks, and are known today as “witches marks”. These ancient symbols of protection ward off evil spirits. They’re found in the dark places of a home, or barn, such as a remote corner, under a sink, or in this case carved into the very back wall. Among the daisy-wheel etchings there was some barely legible, handwritten graffiti that read, On Ash Wednesday 1940 James McCormack and Peter Barnes lost their gallant Lives for Ireland. Gone but not forgotten. Whist lives the IRA.-P. F According to Brendan Anderson’s book, “Joe Cahill: A Life in the IRA”, 2002, James McCormack and Peter Barnes were members of the Irish Republican Army who were executed at Winson Green Prison in Birmingham on 7 February 1940 for participation in the 1939 Coventry bombing which killed five people. The men admitted to constructing the bomb but claimed not to be involved in planting it. The graffiti memorialized their lives and deaths. The etchings and graffiti were a strange juxtaposition between time and space, violence and peace, protection, and vulnerability. It was difficult to get my head around but, thankfully Live Art Ireland residency director and artist Deej Fabyc, and artist and director MJ Newell were there to walk me through it. They contextualized the etchings and graffiti by tactfully navigating my overtly romantic ideas of the site. They directed me to historical facts while addressing the overall taboo subjectivity of the place.

In Contested Site, my cis-female, queer body is explored as a site of contention in relation to the barn. As a relational, site-specific performance piece, I utilized cypress branches salvaged from the land after a Code Red winter storm and some dead bramblebush weed. I employed my body to make lip-prints, and I painted with a handmade brush made from copper piping and synthetic hair. The element of relational practice extended to the other artists on site, Day Magee, Deej Fabyc, MJ Newell and the dog, Ziggy. I performed for the spirits of the barns, and the surrounding natural life. The performance was mediated by two cameras, one camera was directed toward on the canvas, and the second camera framed the overall installation of the piece.

During the Contested Site performance I created a performance-painting in black & white with acrylic and household paint on un-stretched canvas.  I started and ended the performance by holding a pitchfork and ringing a bell three times. Contested Site centered on four actions: sweeping the painting surface with branches from the cypress tree, creating lip-prints by kissing the canvas on the ground, painting circles with my homemade paintbrush, and whipping the canvas with bramble weeds. Each action was performed twenty-five times and the four performative actions totaled one hundred to mark the Republic’s centennial.

The performance took place on a chilly evening on December 14, 2021, and was broadcast over Zoom to an audience of about fifty people for the Virtually Live and Streaming exhibition that featured the work of ten local and international artists. It was produced through an artist residency with Live Art Ireland onsite at Milford House in rural Borrisbane, Tipperary. 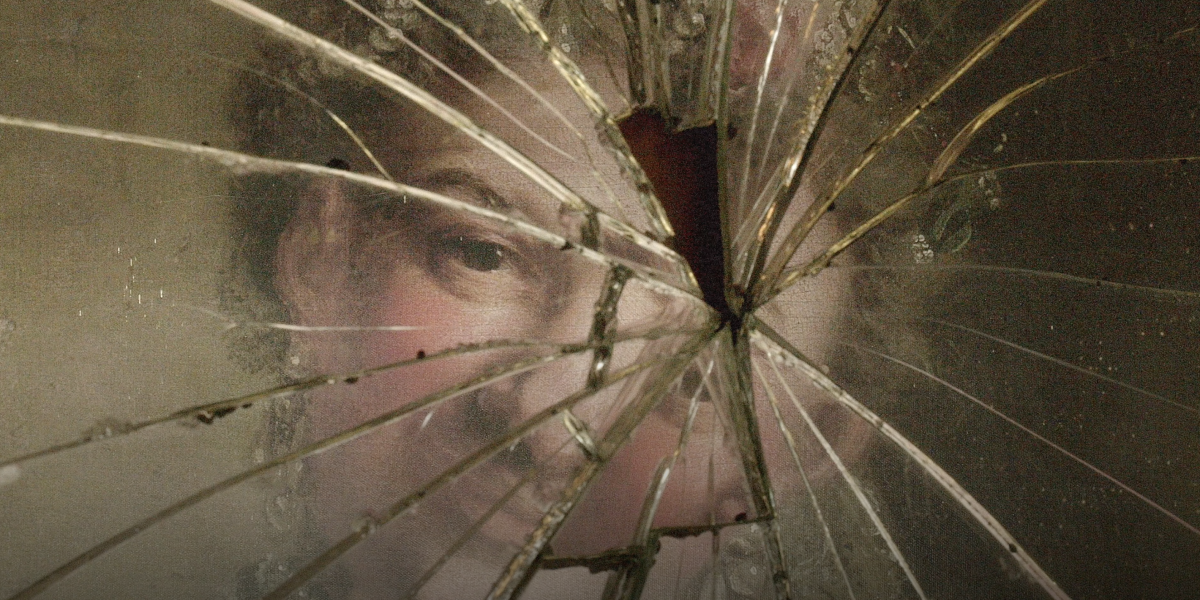 “In the storied borders of the Milford House estate in Tipperary, its socio-geographically contested status reflecting Ireland’s itself, so too are paralleled dynamics of the contested social psychology of the queer sick body. In ‘Eat the Good of the Land’, I situate my body – a vector of its own queerness and chronic illness, and its own ancestry participating in the Irish War of Independence – in this repeatedly reclaimed space, imbuing this ambivalent body with one of the site’s primary materials and resources, the soil of the land itself. I was drawn to the images that now adorn the rooms of the house as selected by Deej Fabyc of Live Art ireland, including that of Countess Markievicz in military garb, and that of the 18th century tenor Pierre Jélyotte dressed as a woman, the queerness of these images as well as my own body as having incongruences with this space.Coming to Milford represented an intervention both physically and spiritually in my practice, a pivot from looking inward to looking outward. My work involves analysing my own subjectivity as it is recorded in my body, but Milford explicitly drew out how I related to a specific site’s psychogeography, as well as its history as shared by Ireland at large under colonisation. It inspired me to look deeper into my own lineage, to question if me in my queerness were really someone who my ancestors had fought and been traumatised for – did I embody the freedom they’d imagined, and if not, how could I?” 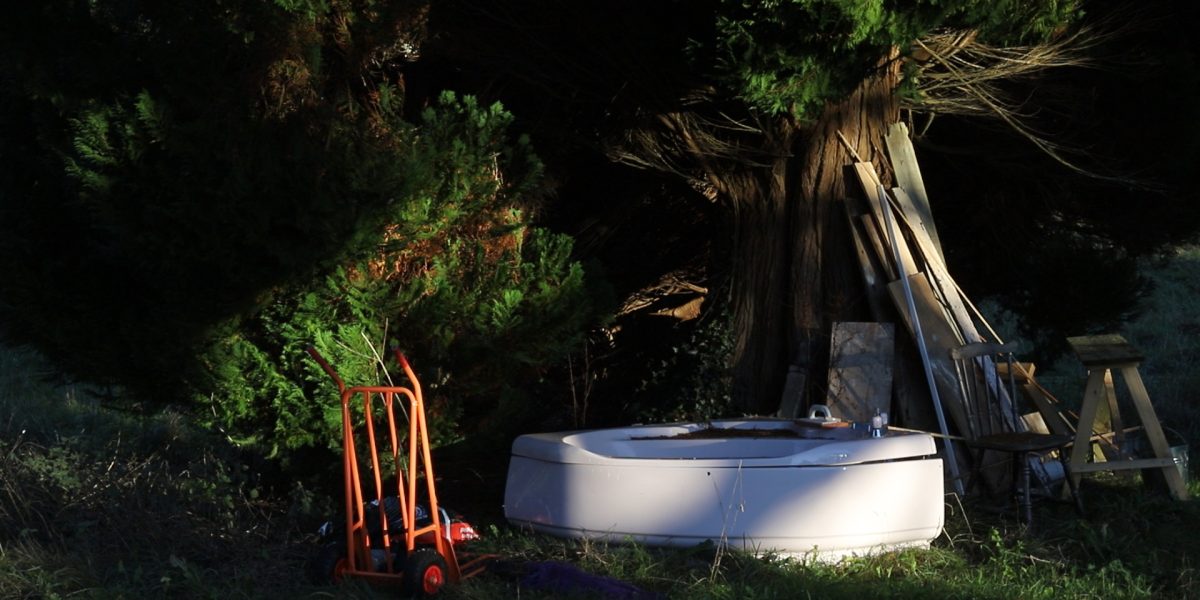 When I arrived at Milford House I was immediately fascinated by the decay and preciousness of its many rooms. Milford House had been slowly deteriorating for at least 10 years before it was purchased in 2020 Windows were broken and the roof was leaking. Live art Ireland  at Milford House is re-purposing the building and thus preserving  its layers of history.

In my residency experience I explored the building from head to toe and its surrounding land, following all the works in progress. Giving new life to a body, in many parts inhospitable, seemed to me to be a real work of art. Each room has many particularities, in its being uninhabited and on its way to being rehabilitated. The house has been modified by time: it has been subjected to settling; some walls have cracked to breathe; in some parts the ceiling has buckled under the weight of puddles of water on the upper floor. In its current form, the house shows a history that is not only historical but also temporal. The rooms are alive and in each of them something, even extremely small and not necessarily human, brings life to them.

In this room a large number of flies fly insistently towards the ceiling and the windows. In addition to a short film, I have also made drawings with the idea of being able to capture a room in all its details in a single glance; I want to evoke the precision of the anatomical drawing and, in the meantime, to underline what brings the anatomy of the house to life.

All the walls of the central flight of stairs are accompanied by a frame of neoclassical stucco cornice that extend all the way to the last studio-room. Made in the past (1750-80) possibly by some Italian craftsmen, the stucco cornice is now in a state of incompletion. Climbing the stairs I had the impression of entering a large mouth that has lost its milk teeth. This mouth or flight of stairs brings one to all the artists studios and therefore ideally opens up ones lead into art. Starting from this intuition, I decided to cast the stucco cornice and replace the missing ones by changing their colour from white to straw yellow.