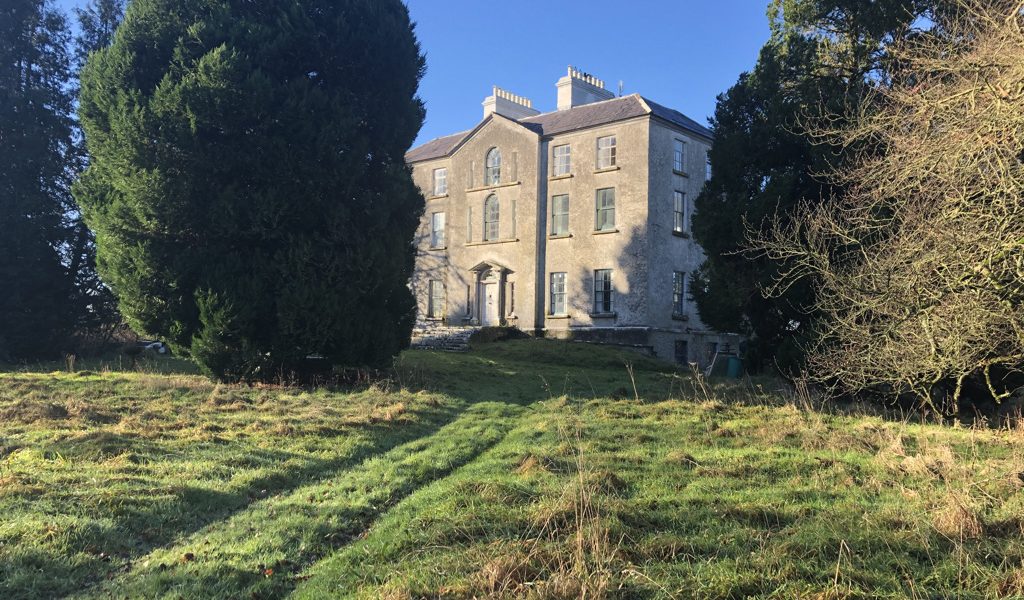 The oldest visible signs of human habitation on the site date to approximately the 11th century. There is a sunken rectangular walled structure to south of the main building that was probably a fortified house or bawn. Built into that structure are the Bee Boles dated 1650. Material from that structure may have been used to build the later farmhouse in about 1650. The lands at that time were owned by the O’Carroll’s evidenced by geneology that mentions Lisheenboy house in the seventeenth century and a Chancery bill regarding a dispute over the leasing of some land dated 1721 It is also known that the final O’Carroll owners of the estate were stonemasons and they regularly made trips to Dublin for work. They were Jacobites and the family had fought in the battle of the Boyne- they were destitute by the 1730’s. Branches of the family moved to Maryland Virginia and became wealthy on the back of slavery. The rather grander structure built to the east  side of the farmhouse in about 1750 -70 was built by the Smiths who had come from the north of England to the Midlands of Ireland presumably at the behest of Oliver Cromwell in the late seventeenth century. They had a house nearby and called Lismacrory. It is not known how they came to owners of the lands at Lisheenboy, part of which they subsequently named Milford. We surmise that the house was completed for the wedding of  Ralph Smith and Elizabeth Stoney in 1772. They only held the lands for a century or so because  a delegation of local tenant farmers ordered them off the lands at the point of a gun in 1849 and they subsequently emigrated to New Zealand. The house was sold under the encumbered estates act in 1857, to a local famer by the name of Murphy. The Murphy’s were keen advocates for catholic education and women’s education. There is evidence from the graffiti revealed under layers of wall paper in the House and from clearing the barns that there was possibly an old IRB cell or at least strong sympathy for the cause . The graffiti dates around 1914 – 39 The house put forward a team for local hurling matches in the 1890’s called the Milford James Stephens team. In the 1960’s the estate was further divided up by the land commision with the land ditributed as smaller farms to local people. In the 20th century the house changed hands several times and the house was renovated a with plumbing to all levels of the house by the 1970s and 80s Hinz family who owned the house before us did extensive work to the rear part of the house and put on a conservatory to the back before the house became a protected structure. Sadly by the time we came to own it in 2020 the house was again starting to fall into major disrepair. We have susequently made the building weather tight and started a comprehensive programme of restoration

The house is set in 17 acres of slightly undulating land 5 kilometres walk from the shores of Lough Derg in North Tipperary. It was grazed by cattle until summer 2020 however it has three areas of recovering woodland. Furthermore, it has many beech, oak, scots pine and lime trees  some of which may be up to 300 years old. In summer and autumn the foliage is alighted upon by a wide range of butterflies and the native Irish black bee. There are red squirrel, hare, pine martin  two species of bat, the soprano pipistrel and the long eared bat in residence on the lands. There are ravens, barn owls & buzzards on the lands and once a white tailed eagle was spotted very high in the sky. There is an ancient orchard with both cooking and delicious eating apples not to mention four cherry trees

The house is currently in a consultation process for ongoing restoration and repair, it contains live in artist studios, a cinema and performance room, a dance and movement studio  a library and a  drawing room.

The barns have been cleared out to provide additional studio / performance spaces and eventually subject to planning, will include a printmaking studio and a ceramics area

There is also a cottage under repairs suitable for artist couples or those with children.